The goal of this paper is to analyze the structure of public expenditure in Iraq and its effect on unemployment and inflation. The importance of the paper accentuates through that the public expenditure considers one of the most important financial political tools which enable to balance between consumption and investment to build an advanced and continues economy. The paper accesses too many results most of them are the existence of disruption in the Iraqi economy in the distribution of investment and consumption expenditure while the consumer expenditures have the greatest portion, there is a fluctuation in both unemployment and inflation throughout the period of preparing the paper. This paper concludes to put the appropriate recommendations.

The public expenditure occupies a special importance in the economic and financial studies, considering it represents the management which is used by the states in order to achieve what they look forward regarding progress and development in all life's sides. The expenditure policy reflects the setting up goals by the government in order to raise the national economy push the development wheel and achieve the economic stability. The structure of public expenditure in Iraq includes disparity in achieving the economic stability, so the effects on development's variables in Iraq should be found. For this reason, the paper is divided into three parts. The first part includes methodology of the paper. The second part deals with the practical side of the paper by analysis the structure of public expenditure in Iraq, analysis inflation phenomenon, analysis unemployment phenomenon, and analysis the effect of public expenditure on both unemployment and inflation regarding the last part, it is dedicated for conclusions and recommendations.

The problem of paper: the structure of public expenditure in Iraq includes a big distortion because the operational consumer expenditure overshadows the investment expenditure. This reflects its effect on the economic development and stability.

The importance of the paper: the importance of paper determines in a way that the public expenditure considers one of the most important financial policy tools which through its balanced between consumption and investment, there will be contribution in building stable economy especially that most of the Iraqi society needs are satisfied through the public expenditure because the great contribution of the government and its great interference in economy.

The goal of paper: the paper aims to find the effects public expenditure in Iraq on some total economy variables in achieving the economic stability.

Hypothesis of the paper: the paper adopts a hypothesis which says that the policy of public expenditure varies in its ability to achieve the economic stability according to the difference of economic conditions.

Echo of the paper: the locative limits of paper represents the policy of expenditure in Iraqi economy and the temporal limits includes the period from 2003 to 2014.

It also clarifies the rate of expenditure’s growth and the total domestic product in the current price, where the public expenditure is based on billion dinars. 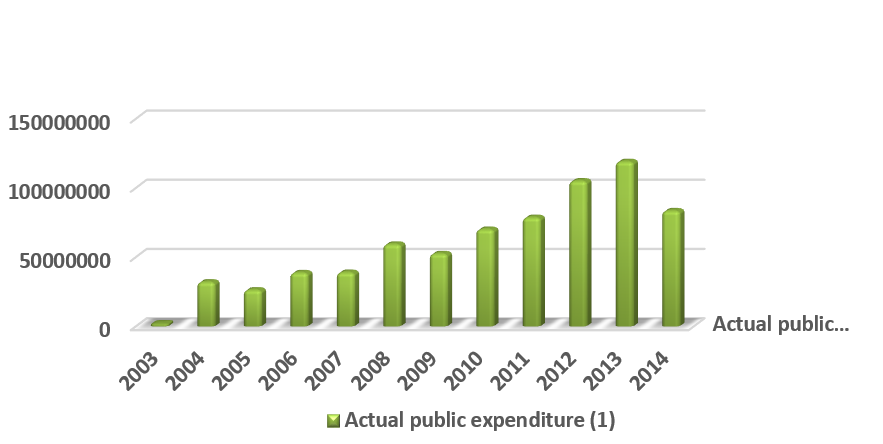 It is noticed from table 2 that the operational expenditure occupied a privileged position of the total public expenditure and the reason returns to the great interest of public sector during this period more than their interest of private sector. The operational expenditure is a consumer expenditure. It should be noted that Iraq doesn’t characterize with flexibility in the productive apparatus because of wars’ destruction and the economic blockade which was imposed on Iraq which disrupt the productive apparatus, results in increasing the consumer expenditure [4, p.82].

The figure 2 represented  operational and investment expenditure in the period 2003-2014. 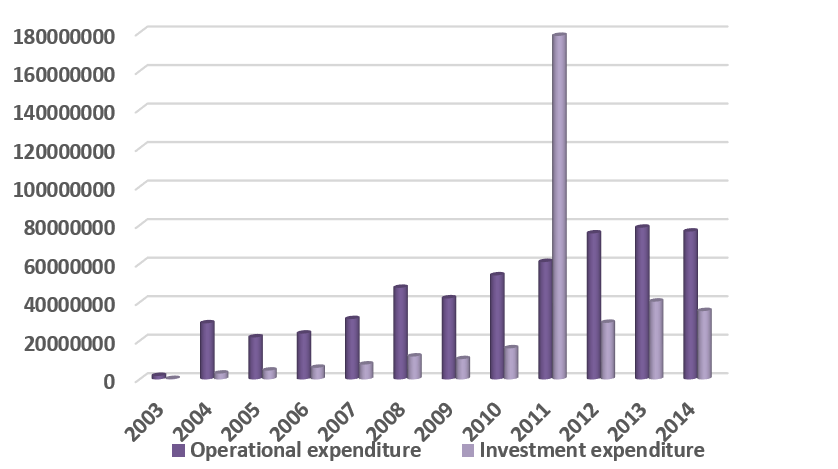 Fig. 2. Operational and investment expenditure in the period (2003-2014) (Reference: prepared by the researcher depending on table 2)

Generally, we notice that the operational expenditure is in a growth along the period of research.

We find that investment expenditure, which consider one of the most prominent instruments of financial policy isn’t given a great importance. It reached in 2003 approximately 198254 billion dinars. The reason of reduction in the rate of investment expenditure on public expenditure is the occupation of Iraq, the rise of violence and terrorist attacks which lead to stop the reconstruction in Iraq, and what was allocated for investment expenditure from the total of budgets' allocations for the following years for 2003 is only a small percentage of public expenditure. It reached in 2004 approximately 3014733 billion dinars. In 2005, it was allocated in the budget for investment expenditure for reconstruction Iraq and recycling the Iraqi economy wheel an amount of 4572018 billion dinar and only 20% was spent from it. This has led to continue the structure imbalance represented by the weakness of local commodity production base especially in industrial and agricultural sectors whereby the role of these sectors retreated largely in the generation of domestic product, whereby it was supposed that financial policy has to allocate which it isn't spent in order to provide the recovery needs of these sectors, when the lack of fuel and energy, which their problems haven't solved yet, considers one of the factors which worsens these sectors. Furthermore. Non-availability of loans and liquidity with regard to the establishment of public sector (industry and agriculture). this explains the persistence of rural character and non-productive for economic policy directives, which contributed in the decline of commodity sectors as a result of concentration of state resources on oil export revenues which constitute more than (95%) of country's budget and neglect the other sectors like industry, agriculture and others, consequently, the weakness of the national production system and the dependence on imports from abroad [5, p.44].

The inflation in the Iraqi economy during the stated period characterized by volatility sometimes it arises too high and another time it lowers on this basis, inflation in Iraq can be divided during the study period into two periods. The first one is the period of high inflation (2003-2008). This new trend in the rise of inflationary comes from many reasons which were caused by the pressure of aggregate demand that has contributed significantly in maximization the risks of inflation caused by withdrawal the expenditure in general and consumer government expenditure in particular (with the inefficiencies of large productive sectors, particularly in the field of agricultural and industrial activity). from the above structural shortcomings have existed because of the underdevelopment in the economic structure, increasing the reliance on imports and exacerbation of external indebtedness, in addition to the economic, political and security upheavals, after war [9, p.2].

It indicates from table 3 that the rate of inflation reached in 2003 approximately 33.6% then it declined slightly in 2004 reaching 27.0%. Then it has grown rapidly to reach its highest level in 2006 reaching 53.1% because of the raising prices of oil derivatives when the government reduced the support for it.

The second period 2009-2014. This period underwent low inflation rates don't exceed one decimal point since the inflation rate in 2009 reached 8.3%, then it decreased to low level in 2010 reaching 2.5%. The two years 2013-2014 underwent a great reduction reaching 1.9% and 2.2% respectively, that's because the global financial crisis which afflicts the world economy and leads to decrease the imported goods consequently, the rate of inflation has declined.

Furthermore, the availability and low prices of petroleum products, and the global decline of primary commodity prices particularly food commodity prices according to the food and agriculture organization of the united nations (FAO) against backdrop of availability of offered thing and decline of global demand (Central Bank Economic Report, 2005).

Statistical estimates indicate that the scale of unemployment in Iraq is great. There is no doubt that the public sector alone cannot afford an additional opportunity job, the private sectors are labor- invasive and suffer from under employment problem. About the weakness of domestic private sector, the government finds an embarrassment in finding a necessary opportunity job to solve the unemployment problem [2, p.48].

The most prominent characteristics of Iraqi labor market is the high of display's growth rate from work as result of the high rates of population growth and labor force under the slow of demand growth for work which results from several factors, notably, the ability to increase the aggregate supply tailored to the total effective demand, consequently, growth in import volumes by more than export.

That is means declining investment opportunities and capital formation as result of exit of foreign currency. This have the effect if increasing difficulties facing the Iraqi economy to direct economic activities in the fields that achieve the determination and economic stability.

Reference of table 4: republic of Iraq. Ministry of planning and cooperation development, department of economic models, different years using the data of table 4 can be gate figure 4

These include the interim coalition government's demobilization of the Iraqi army, disturbance of security situation and increasing of looting plunder and sabotage and many other problems [3, p.71].

We notice through the data of table 5 that public expenditure rising steadily long duration of search despite its flection from year to year because of the expansion of the role of the government and its intervention in various fields of life. This reflected in achieving the economic stability through several indicators, including unemployment and inflation. This effect is observed when public expenditure increases as shown in table 5. We find that the rate of unemployment and inflation decreases to different levels public expenditure was low in 2003 reaching 1982548 billion dinar and unemployment was in its highest rate in the same year reaching 28.10%, and the rate of inflation was also 33.61%.