The relevance of the topic is dictated by the new geopolitical situation that arose after the collapse of the Soviet Union and the formation of a number of independent states on the territory of the former USSR and taking into account the existing relations between Russia and Ukraine. Kazakhstan gained independence on December 16, 1991. From that moment on, he became a full-fledged subject of international law. China's role in the global economy and global politics is steadily increasing. According to many economic indicators, today's Beijing is one of the key centers of power in the international arena, competing with the United States. One of the most important factors that favorably influenced the development of bilateral relations was the fact that China was one of the first to recognize the independence of Kazakhstan. It has been about 30 years since the establishment of diplomatic relations between Russia, China and Kazakhstan. The interaction of the three countries in different spheres allows us to speak about its high rates [1, p.236].

Kazakhstan was fully aware of the need to build stable, good-neighborly relations with China and Russia as a reliable guarantee of the security of our young state. Confrontation and mutual suspicion would run counter to the strategic interests of Kazakhstan, which had to solve such complex tasks as joining the world community of civilized states and carrying out structural transformations in the economy (fig.). 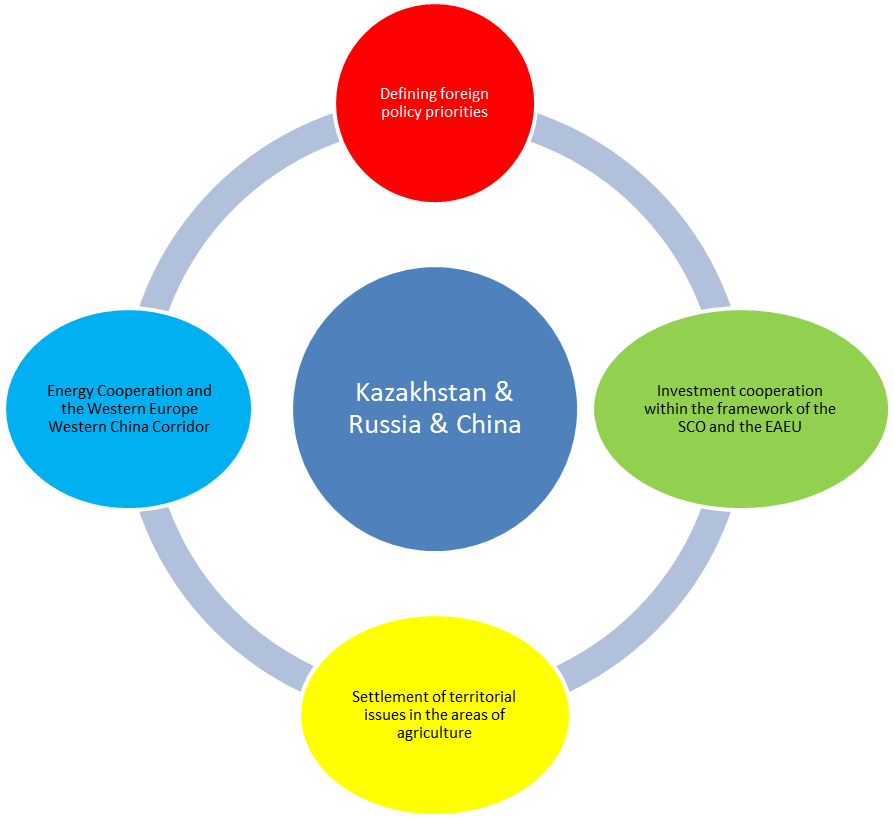 Fig. Diagram of the process of formation of international relations between the three countries

It should be noted that the formation of the foreign policy of the Republic of Kazakhstan took place during the transformation of the state-legal system of the country. The prolonged transition period from the Soviet model of statehood to a new, independent one, as well as the amorphous nature of the national political ideology in Kazakhstan led to the formation of their own priorities for cooperation, the definition of the necessary and actual "depth" of cooperation with neighboring states (the term "depth" in this case refers to the degree of involvement of states in cooperation in all areas, in this case the maximum "depth" - reaching the level of strategic partnership). The transformation led to the emergence of a new entity in the international legal field - the Republic of Kazakhstan emerged from the Kazakh SSR. Also, the first period of the existence of independent Kazakhstan can be called the period of development of a foreign policy concept [2, p.125].

Currently, China remains one of the permanent business partners of the Republic of Kazakhstan. China is one of the most promising trade, economic and political partners, because the ongoing processes in China, socio-economic and political reforms are already having, and will continue to have quite a strong impact on the stability and security of both the Republic of Kazakhstan and the entire Central Asian region.

Joint projects implemented with the participation of China and Kazakhstan not only bring neighbors closer together, but also make a significant contribution to the economy of both countries. The key aspects of considering mutually beneficial cooperation are fuel and energy projects and projects related to the use of hydro resources. In terms of trade with China, Kazakhstan ranks second among the CIS countries. Currently, there is an intensification of the functioning of projects of existing transport lines between China and Kazakhstan. China is becoming a strong competitor of Russia in the Kazakhstan market, including in the above-mentioned areas.

The Chinese factor should also be taken into account when shaping Russia's policy in Central Asia, in particular, in relations with the Republic of Kazakhstan. Central Asia has been and continues to be one of the priority regions in the foreign policy of the Russian Federation. This can be confirmed by the fact that Russia is currently a strategic partner of the countries of the region. The objectives of Russian foreign policy in the region are, first of all, to restore ties with the Central Asian states at all levels (as well as to consolidate political and economic positions), control over resources, weaken negative trends in the development of the region, and ensure the rights of the Russian-speaking population. To ensure its own interests, Russia uses a full range of methods, including the military-power factor, the legitimacy of which in the post-Soviet space has recently been increasingly questioned, including by the United States and China.

In the future, the growth of economic cooperation between Russia and Kazakhstan will inevitably lead to an increase in the economic interest of Russian capital in the markets of Central Asian states, where it will face increasing competition of Chinese goods and investments. Thus, the study of the role of China and Russia in the foreign policy of the Republic of Kazakhstan is undoubtedly relevant [3, p.282].

During a visit to China, K.Tokayev tried to put the economic agenda in a new direction. At a meeting of the Kazakh-Chinese Business Council held in Beijing, the Kazakh president noted that the development of a "new economy" based on innovations and new technologies, as well as high-tech industries and elements, is of particular interest to the republic.

During the 74th session of the UN General Assembly in September 2019 President Kassym-Jomart Tokayev proposed to create a center for sustainable development for the countries of Central Asia and Afghanistan, which is also an important element of Kazakhstan's Asian policy. It was stressed that Kazakhstan, as the largest economy in Central Asia, is vitally interested in further strengthening mutually beneficial cooperation between all states, especially on the Asian continent [4].

Thus, Central Asia is undergoing a fundamental geopolitical shift, which will result in new roles for China, Europe, Iran, Russia, South Asia and the United States and new relations with them. Together, these changes will lead to a geopolitical reorientation of the region from Europe and the United States to Asia. By 2025, this trend will already manifest itself in full growth. According to the author, there are many problems in the region that should be solved in a bilateral format, and not through participation in alliances.

The author emphasizes that the role of Russia and China in Kazakhstan's foreign policy is very important; the countries have largely coinciding and harmoniously consistent strategic and geopolitical interests. Kazakhstan has come a long way in 30 years of its sovereignty. The country's leadership can note the impressive economic development, stability, strengthened sovereignty and respect for the brand "Kazakhstan" in the international arena. Occupying a strategically important position between Russia, China and Central Asia, Kazakhstan was forced by geography and geopolitics to develop far-reaching strategies for its development. In the field of economic development, it can be predicted that long-term economic development will require the transformation of the economic structure and management system of Kazakhstan.