Classification of the air conditioning system

Thanks to the automatic thermoregulation of the body, a person adapts to changes in the parameters of the surrounding air. However, this thermoregulation is effective only with slow and small deviations from the normal parameters necessary for well-being.

With large and rapid deviations of the parameters of the air environment, the physiological functions of the body are disrupted: thermoregulation, metabolism, the work of the cardiovascular and nervous systems, etc.

At the same time, serious deviations in the human body can also be observed. For example, people who have fallen into the conditions of "overheating", body temperature rises, performance decreases sharply, irritability appears, etc.

The task of air conditioning is to maintain such parameters of the air environment in which each person, thanks to his individual system of automatic thermoregulation of the body, would feel comfortable, i.e. would not notice the influence of this environment.

From a hygienic point of view, the most favorable temperature level maintained in a residential area is 22 'C, and the permissible fluctuations are from 21 to 23 'C. A lower air temperature, for example, 18 'C, recommended in regulatory materials for the design of heating systems, is rated as "cool" and "cold".

At the same time, it should be noted that in microclimatic conditions, which are considered ”normal”, usually up to 10% of people feel varying degrees of discomfort. This is due to various social conditions of life: the usual climate, clothing, food, housing conditions, etc. Air conditioning is the creation and automatic maintenance (regulation) in enclosed spaces of all or individual parameters (temperature, humidity, cleanliness, air velocity) at a certain level in order to ensure optimal meteorological conditions that are most favorable for the well-being of people or the conduct of the technological process [1].

Air conditioning is carried out by a complex of technical means called an air conditioning system (SLE). The composition of the SLE includes technical means of air intake, preparation, i.e., giving the necessary conditions (filters, heat exchangers, humidifiers or dehumidifiers), movement (fans) and its distribution, as well as means of cooling and heat supply, automation, remote control and control. SLE of large public, administrative and industrial buildings are serviced, as a rule, by complex automated control systems.

The automated air conditioning system maintains a preset air condition in the room regardless of fluctuations in environmental parameters (atmospheric conditions).

The main equipment of the air conditioning system for the preparation and movement of air is used in a single housing in the apparatus, the so-called air conditioner. In many cases, all technical means for air conditioning are arranged in one block or in two blocks, and then the concepts of "SLE" and "air conditioning" are unambiguous.

Before proceeding to the classification of air conditioning systems, it should be noted that there is still no generally accepted classification of SLE, and this is due to many variations of schematic diagrams, technical and functional characteristics that depend not only on the technical capabilities of the systems themselves, but also on the objects of application (air-conditioned rooms).

Modern air conditioning systems can be classified according to the following criteria:

In addition to the above classifications, there are various air conditioning systems that serve special technological processes, including systems with time-varying meteorological parameters.

Technological SLE are designed to provide air parameters that meet the production requirements to the maximum extent. Technological air conditioning in the rooms where people are located is carried out taking into account sanitary and hygienic requirements for the state of the air environment.

The central SLE are supplied externally with cold (delivered by cold water or refrigerant), heat (delivered by hot water, steam or electricity) and electric energy to drive electric motors of fans, pumps, etc.

The central SLE are located outside the serviced premises and air-condition one large room, several zones of such a room or many separate rooms. Sometimes several central air conditioners serve one large room (a production workshop, a theater hall, an indoor stadium or an ice rink).

Central SLE are equipped with central non-autonomous air conditioners, which are manufactured according to basic (standard) equipment layout schemes and their modifications.

Central SLE has the following advantages:

Despite a number of advantages of central SLE, it should be noted that large dimensions and complex installation and construction work on the installation of air conditioners, laying of air ducts and pipelines often lead to the impossibility of using these systems in existing reconstructed buildings.

Local SLE is developed on the basis of autonomous and non-autonomous air conditioners, which are installed directly in the serviced premises.

The advantage of local SLE is the ease of installation and installation. Such a system can be used in a large number of cases:

Autonomous SLE are supplied from the outside only with electrical energy, for example, split-system air conditioners (Figures 1, 2, 3), cabinet air conditioners, etc. Such air conditioners have built-in compression refrigerating machines, working, as a rule, on freon-22. 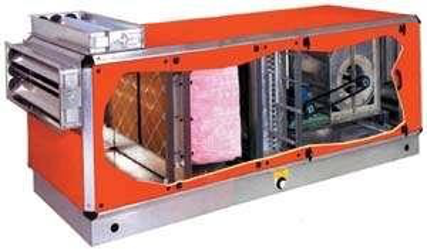 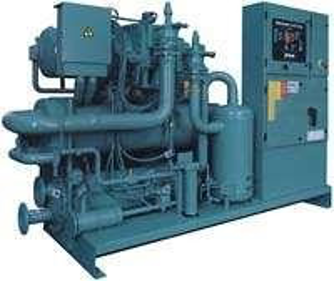 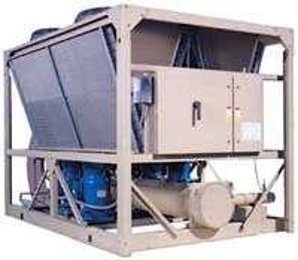 Autonomous systems cool and dehumidify the air, for which the fan blows recirculating air through surface air coolers, which are evaporators of refrigerating machines, and in the transitional and winter time they can heat the air using electric heaters or by reversing the operation of the refrigerating machine according to the cycle of the so-called "heat pump" [3].

The simplest option, representing the decentralized provision of indoor temperature conditions, can be considered the use of split-system air conditioners.

Non-autonomous SLE are divided into:

Single-zone central SLE are used to service large rooms with a relatively uniform distribution of heat, moisture emissions, for example, large cinema halls, auditoriums, etc. Such SLE, as a rule, are equipped with devices for heat recovery or mixing chambers for use in serviced air recirculation rooms.

Multi-zone central SLE is used for servicing large rooms in which the equipment is placed unevenly, as well as for servicing a number of relatively small rooms. Such systems are more economical than separate systems for each zone or each room. However, with their help, the same degree of accuracy of maintaining one or two set parameters (humidity and temperature) cannot be achieved as with autonomous SLE (split-system air conditioners, etc.) [4].

Direct-flow SLE fully operate on outdoor air, which is processed in an air conditioner, and then fed into the room.

Recirculating SLE, on the contrary, work without inflow or with partial supply (up to 40%) of fresh outdoor air or on recirculating air (from 60 to 100%), which is taken from the room and after its treatment in the air conditioner is re-supplied to the same room.

The classification of air conditioning according to the principle of operation into direct-flow and recirculating is mainly determined by the requirements for comfort, the conditions of the technological process of production or technical and economic considerations.

Central SLE systems with high-quality regulation of meteorological parameters represent a wide range of the most common, so-called single-channel systems in which all treated air under specified conditions exits the air conditioner through one channel and enters further into one or more rooms.

In this case, the control signal from the thermostat installed in the serviced room goes directly to the central air conditioner [5].

SLE with quantitative regulation is supplied to one or more rooms with cold and heated air through two parallel channels. The temperature in each room is regulated by a room thermostat acting on local mixers (air valves), which change the ratio of the flow of cold and heated air in the supplied mixture.

Two-channel systems are used very rarely due to the complexity of regulation, although they have some advantages, in particular, the absence of heat exchangers and pipelines in the serviced rooms; the possibility of working together with the heating system, which is especially important for existing buildings, whose heating systems can be preserved when installing two-channel systems.

The disadvantage of such systems is the increased costs of thermal insulation of parallel air ducts supplied to each serviced room.

Two-channel systems, as well as single-channel ones, can be direct-flow and recirculating.

First class – provides the parameters required for the technological process in accordance with regulatory documents.

The third class provides acceptable standards if they cannot be provided with ventilation during the warm season without the use of artificial air cooling.

According to the pressure generated by the fans of central air conditioners, SLE are divided into low-pressure systems (up to 100 kg/m2), medium pressure (from 100 to 300 kg/m2) and high pressure (above 300 kg/m2).