Status and trends of Russian wheat exports to China

Russia has the highest international production of wheat and exports to China are huge, wheat is one of the main economic sources for Russia and is of great value for the economic development of Russia. China has a high demand for wheat and attaches great importance to the relations between Russia and China and Russian wheat exports to China, which are close to each other and are influenced by “one Belt one Road” relationship, which makes the relations between the two countries very friendly and valuable for studying the Russian wheat trade exports to China.

According to the Russian Export Development Center, since 2015, Russia's agricultural and sideline products, as well as livestock, agriculture and other export quantities ranked among the top in the world, according to the comprehensive data for 2020, Russia harvested a total of 133 million tons of grain for the year, of which wheat accounted for the world's total wheat exports ranked first in the world. China is the main wheat-producing country in Russia, and according to the Russian trade volume, Russia's wheat exports have increased year by year since 2012 until 2018. It reached $10.4 billion in 2018 from $3.84 billion in 2012. In particular, the existence of a significant increase in the trade value of wheat exports in 2018 shows that Russian wheat is more competitive in the market and generally shows a stable growth in development (Figure 1). 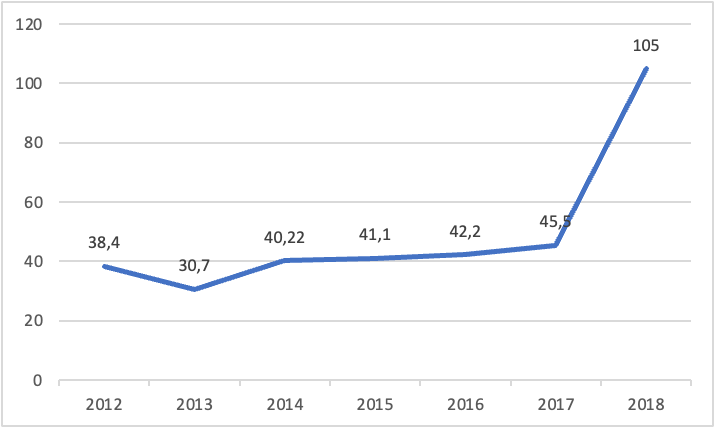 According to the statistics, the total size of Russian wheat exports to China in 2020 is 80% (Figure 2), which is a very high percentage of the wheat exported to China. In 2022, as a result of the conflict between Russia and Ukraine, Russia will mainly export red-skinned wheat to China, which will provide Russia with higher economic benefits in a shorter period of time due to its higher yield and shorter production second, although Russia has certain advantages in wheat exports, we can see from the above analysis that Russia mainly exports red-skinned wheat and there is Wheat varieties are too single, especially in the current situation of the Russian-Ukrainian conflict, in the future the two countries tend to stabilize trade, the impact of Russia's export of wheat is too single will be more exposed, affecting the overall wheat export competitiveness. 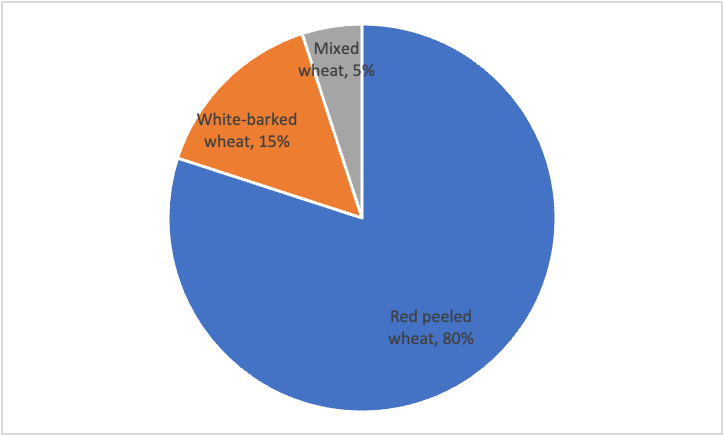 Russia in the process of export trade transactions of wheat, is bound to be affected by the Chinese government and related control measures, which are covered in Chapter 2, and the current export policy of Russian wheat is also being adjusted at any time, Russian wheat exports for control, the current Russian encouragement of wheat for export trade, strengthening the friendly and cooperative relationship between our two countries, actively promoting the share of Russian wheat exports to China, and the international market share affects the Russian exports of wheat to China, and the above are also important factors affecting the Russian exports of wheat to China.

Using the data in Table IV bar V for curve fitting, the sustained import demand for wheat in China in the next few years can be projected for future wheat imports (Figure 3). 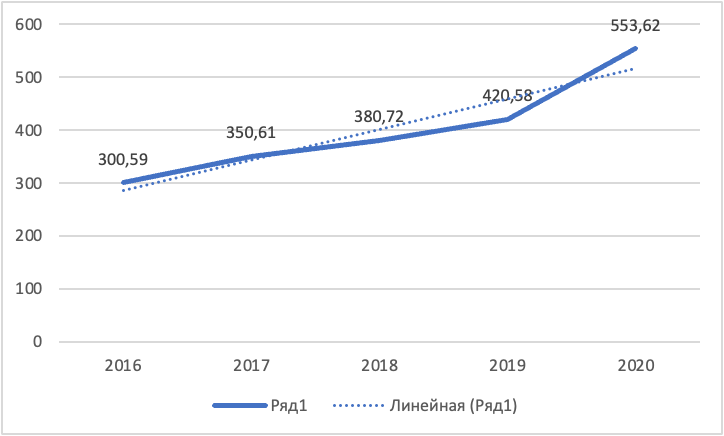 Russian wheat exports to China (in millions of tons)

In recent years, Russia's trade exports to China, wheat trade exports are also continuing to go up, due to the impact of the Belt and Road between the two countries and the impact of bilateral cooperation relations, China will continue to increase wheat trade with Russia to enhance Russia's wheat sales capacity in China, to enhance domestic demand, from which it can also be seen that the trade between China and Russia will continue to advance, the future bilateral trade relations between the two countries will become better and better, Russia's wheat exports to China will reach a new high, in the next few years, Russia's total wheat exports to China is likely to reach the million ton level.

(1) Production technology is not advanced enough

First of all, Russia's technology in seed breeding technology is low, good breeding technology can effectively improve the quality of wheat and enhance the competitiveness of wheat in the international arena, currently in the breeding process, Russia adopts a high use of technology in production, while the amount of capital investment in the cultivation of seeds is low, lack of innovation and effectiveness, or the use of more traditional breeding methods, which leads to the overall yield This has led to low overall yields and low production efficiency, which does not provide a good basis for the development of the Russian export trade and affects the development of the Russian wheat trade.

(2) Low use of agricultural machinery in wheat production process

First, the agricultural machinery technology in the wheat planting process is outdated, Russian farmers still use the traditional manual sowing method of wheat planting, while in developed countries, they all use mechanical sowing for wheat, sowing efficiency is very high, mechanical sowing than manual sowing efficiency can be increased by more than five times, and it consumes human and material resources, in the process of wheat sowing, Russia's pesticide spraying, wheat irrigation, etc. are still the same. In the wheat sowing process, pesticide spraying, wheat irrigation and other aspects of the traditional method of operation are still used, which greatly affects the efficiency of the wheat planting process.

From a comprehensive point of view, the world's developed and developing countries, such as the United States, China and other countries, are a large number of agricultural machinery technology research and development, in order to increase the production efficiency of all walks of life, while Russia is currently in the wheat sowing and harvesting process, has not used enough agricultural machinery technology for efficient production, which is another important factor affecting the volume of Russian trade exports.

First, the overall area of the Russian regions is large, but the number of people is low and the labor force engaged in wheat production is low. From the distribution of each crop growing region in Russia, the wheat growing region is mainly concentrated in the Far East, while most of Russia's population is concentrated in the European zone, which is more suitable for people's life and better development, which leads to a smaller population in the Far East and a lack of wheat growing labor force, limiting the production capacity of wheat in Russia.

Finally, very few people in Russia are currently willing to engage in the wheat industry, most young people have gone to work in industries with more future prospects, most people think that wheat is a farmer's business and do not recognize the future potential of agricultural products planted in the wheat growing process, there are already fewer young people willing to engage in the production of agricultural products, which is also an important factor that plagues the development of wheat in Russia (Table 3), but As a result of the recent Russian-Ukrainian conflict, which has led Russia to vigorously promote its own local enterprises, wheat, as an important agricultural product for Russian exports, is also an important means of obtaining foreign exchange in Russia, so in vigorously promoting the development of the Russian wheat growing industry, promoting a lot of policies to support the development of agriculture, the situation of wheat growing in Russia has only improved a little.